Reflections from a First Year Principal

Reflections From A First Year Principal

I was incredibly humbled when Dr. Ziegler (@DrBillZiegler) reached out to me to ask me to contribute to his blog series on Young Leaders. First, I appreciate the adjective “young”. As my daughter is finishing up first grade and I am encountering more and more jargon from students that I have to Google for meaning...I am grateful to still be considered a “young” leader.

My first year as Principal. I’m in it; in fact, I’m almost through it. What a proud thought. When I look back over my first year, I think about what I’ve learned, what I’ve accomplished, what mistakes I’ve made, the relationships I’ve built, those who have supported me to success, the challenging conversations, and the vision I am starting to build as I enter my second year at the LES.

So what are my take-a-ways from my first year at the helm? Through smooth or choppy water, these three tidbits carried me through my first year as Principal. They are lessons I will remember for many years to come, even when my adjective before leader moves away from “young”.

1. Never Underestimate the Power of An Administrative Assistant

My predecessor was the Principal of the Lower Elementary School for 16 years. He knew the building. He built the culture. He established the protocols. He was familiar with generations of families who went through the LES. He knew where the boiler room was, how to fill out a Purchase Order, and what the fire code was for assemblies. In my first few months, I knew almost none of that. I was a new fish in a new pond and I was just trying to remember everyone’s name. When parents, teachers, students, and community members would ask me questions, it felt awkward to not know the answer as I very much wanted to make a good impression on all of the stakeholders invested in me.

I’m not one for pretending to know something when I don’t, and I’m not afraid to ask for help. But there is a certain pressure when teachers, colleagues, parents, and students want a decision on something and suddenly you’re the person in charge of making that decision. It can feel overwhelming sometimes and eerily permanent, as if whatever you decide can never be undone. Making decisions in the early months of my new position was challenging, as I was still learning the culture of the building and how things were done “in the past”.

I may not have known a lot about the building when I got to New Hope-Solebury, but I had 14 years of education under my belt and, I came to find out, I had two secret weapons.I had Mrs. Driscoll and Mrs. Dupont, the Administrative Assistants at the Lower Elementary School. The first lesson I learned as a new Principal is simply to never, ever, ever underestimate the power of your administrative assistants. The two women working in the LES front office were my saving grace. They taught me about the community, they told me about the school’s traditions, they kept my calendar in tact, they smiled when I was excited about a meeting that went well and sympathized when I hit my bumps along the first-year road. They were true difference makers in my first year and whatever success I encountered, I attribute in part to them and their genuine support. If you are beginning a new administrative position, my advice to you is to make time to talk to your administrative assistant. Often. They know more than you do about the building you’re running. Embrace and be grateful for their expertise!

2. Add New Bricks to the Road

Becoming the new Principal of a building meant I was walking into a set of norms and practices that had been established, in my case, for some time. The successes and areas of growth for the building had been created by the people who walked its halls and empowered its children well before my time in New Hope-Solebury. My district is high-performing and the LES is the foundation for that excellence. As I first started to observe in classrooms, both informally and formally, I focused on the areas of strength I saw in each classroom teacher and aide. There is A LOT to be proud of at the LES and I wanted to spend time meaningfully praising the instruction, creativity, and collaboration I saw throughout the building. Every book you read on leadership discusses building trust: it was important for me to let the educators in my building know that I valued the work they had done for years. That work is the essence and story of the building.

I spent my first year observing, listening, learning, implementing small changes where I thought it was necessary and meaningful, and purposefully working on a vision for the building that I plan to introduce in my second year as principal. Since I dedicated myself to learning the road that came before me through conversations with teachers, parents, students, administrators, and community members, I am more familiar with the building’s shining attributes and areas of continued growth. I am excited to lead, to create opportunities for change, and to encourage teachers to take risks in the classroom, with respect to the dedicated work that has occurred for our students in decades past. I am looking forward to adding new bricks to the LES road, founded on the strengths of each classroom teacher and their willingness to take the next step. For first time administrators, I learned it is important to build upon the road that has already been laid. Make it stronger and make sure when you look back, people are following you through each new turn.

One month into my first year as Principal, I had the honor of speaking at the What Great Educators Do Differently (#WGEDD) conference in the Finger Lakes, NY. There, I had the opportunity to chat with Todd Whitaker (@ToddWhitaker) about my new role. I remember him asking me how long I’d been the Principal, to which I responded, “one month”. He smiled at me and said, “so...you’re still undefeated”.

Being a Principal...an educator in any capacity...is challenging. There is a lot to navigate, all while keeping the students as your central focus for decision making. Some days you may do 100 things right only to have one thing go wrong, and that’s where your mind will stay for the rest of the day, if not longer. After telling me I was still undefeated, Todd said something else I will always remember: “celebrate the victories”.

In my first year as Principal, I am thrilled to celebrate having the chance to get to know and work with such a fantastic group of educators at the LES. They have been welcoming and flexible in their thinking, as we begin to add our next bricks to the road together. I celebrated each time a kindergartner left his parent a few minutes earlier than last time without tears and when a teacher found a new way to connect with a struggling student. I celebrated my counselor, who tirelessly worked with students struggling with heavy burdens on their tiny shoulders all while teaching me about the students she has dedicatedly worked with for years. I celebrated my new community connections, as I feel a part of the LES family now after working with so many different parents in different capacities.

As a new Principal, you’re going to make mistakes. It’s inevitable. Feel them, learn from them, move on from them. But don’t stop celebrating the victories. Each child who smiles up at you as you walk by them in the hallway represents a new one. Let that be what you remember the most about the day!

Jennifer is the Principal of New Hope-Solebury Lower Elementary School in Solebury, PA. Jennifer started teaching in 2004 in the Central Bucks School District in Bucks County, PA. She then moved to serving as an Assistant Principal at McDonald Elementary School in the Centennial School District. She was honored to be featured in the book, "The Principled Principal" by Anthony McConnell and Jeff Zoul.

5 Ways to Lead When Your School is Closed

Top 10 Ways to Grow As A Principal 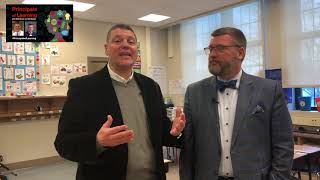 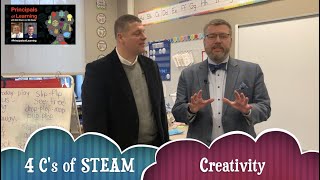 4 Questions To Ask Teachers On Creativity

7 Keys to Having Courageous Conversations for School Leaders

Better Together - 6 Ways To Bring People Together During COVID-19

5 Ways to Lead When Your School is Closed

Top 10 Ways to Grow As A Principal

4 Questions To Ask Teachers On Creativity